We set off just after 8:30 to start our 9 day safari. We had a 4/5 hour drive to Tarangire National Park. We arrived at 1 and ate our packed lunches before having a long game drive. As soon as we entered the park we saw Zebra, Wildebeest and a herd of Elephants The herd were amazing, containing elephants of all ages and sizes. As we stared to move away we noticed a Giraffe across the road and the Elephants started to cross the road towards it. I got probably my favourite shot of the day at this point, with one of he Elephants walking towards the Giraffe and a flat top acacia tree in between them.

The continued to go well as we tried to see ore of the big 5 (Elephant, Rhino, Leopard, Lion and Buffalo) and others. We saw Impala, Grant and Thomson Gazelles, lots of small birds, Vultures, Ostrich, Banded Mongoose, Wart Hogs and plenty of Zebra, Wildebeest and Elephants.

Our car was fitted with a radio with which the guides share information on. Our guide, Florid, heard there was a lion around so we headed in that direction. Sure enough there were three lions all close together; two female and one male. They were magnificent to watch. A jackal strolled past very close to one of the females and the other two were constantly watching two large groups of vultures in trees behind them.

We headed off to see what else we could fine after around 20 mins. We came on a other big cat quite soon after in the form of a Cheetah. We were very lucky as in this park our guide said he go could 6 months without seeing one! We even to see it run as it darted over the road.

The day was coming to an end and we had to be out by 6. We managed to see a large bull Elephant, which charged at us, and a Sea Eagle as we headed out as well as another large herd of Elephants.

Our camp was a thirty min drive from the park. As we turned up there were ‘Masi Warriors’ there to carry our bags and guide us on the paths in the dark. The tented camp was far nicer than I thought. The food that night was also amazing. I look through my pictures for the day before heading back to my ‘tent’ with assistance of a Masi Warrior.

We were up and at the car for 6 for an early morning drive. We headed into a different part of the park. After seeing a few Gazelles, Zebra, Wildebeest and Elephants (the Elephants were amazing but we started to see so many of them. The park may have the larges concentration of Elephants in the world.) we came across another of the big 5, a Buffalo. What began with looking like only 20 turned into nearer 200 as more and Buffalo came out of the river. They were quite far away but still great to see.

We continued to drive around and see nothing else new so we decided to stop for our breakfast, which had been packed by the lodge. The picnic site was amazing as it was on a ridge top over looking a river and a large herd of Elephants came down for a drink as we ate. We had some fearless squirrels and spectacular Starlings also trying to share our breakfast!

We had the radio on again and after a long time of seeing nothing it came over the radio a Leopard had been spotted! One had climbed a Baobab tree and was 40/50 meters from the road. It was sleeping and oblivious to the 10 or so cars watching it. It was great to see 4 of the big 5 as Leopards are even rarer than Cheaters in this park and there aren’t any Rhinos.

As we left the Leopard we stumbled across a group of 7 Giraffes in a dry river bed, which was one of the only things we haven’t see at this park. Fittingly we saw one more herd of Elephants before leaving and heading back the camp for a hot lunch.

We had our lunch and set off on a thankfully Tarmac road back to a junction on the highway. We were swooping our guides to Frank, not the owner of the company but another guide as there had been a complication in our first guide so this was the second arrangement.

We had a brilliant start to our Safari and seen so much in such a short space of time. I’m up loading some pictures onto the blog of the Safari over the next few days. 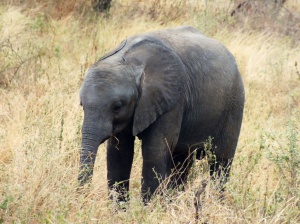 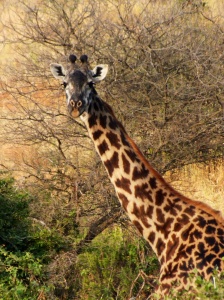 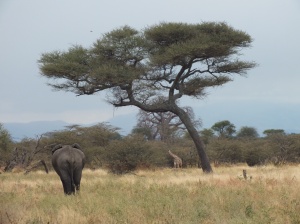 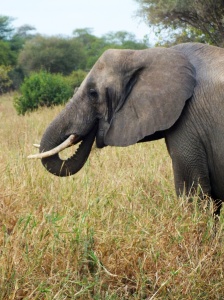