Half way through the second day of our safari we changed drivers. Frank the second was steering the car towards Lake Eyasi. We had a few hours of tarmac before hitting a very very dusty and bumpy road. A truck was stuck on a particularly step and rugged bit of road and had rocks put under its wheels and left…

Just over an hour into our journey on the dirt road, I was asking Frank about break downs he had had. A couple of minutes later we had stopped as the engine temperature had risen… We stopped on the edge of a Masi village and produced great entertainment for the locals. Children quickly gathered around our car and wanted a photo whilst an elderly man, under the effects of a few banana beers, ranted in Swahili and English at poor Frank plus to other Tanzanian guides who stopped to help. After a box and a half of tea leaves, two eggs and lots of water we were on our way with a less leaky radiator.

The rest of the journey went smoothly and we arrived in our very windy camp. This was a slightly less up market camp, but still a very upmarket ‘tent’. Dinner was brilliant again. We sat after dinner in a lowered camp fire area which was protected from the wind and enjoyed the stars.

We had a very early start as we were to pick a local guide up at six as we were going to a local village of a nomadic tribe to join them on their morning hunt. We were told they still lived their nomadic life and hunted twice daily for small animals. We set out for a few hours with three of the men, who were all armed with bow and arrows, to find some food. Comically Ewan and I were also given a bow. They attempted to make some impossible shots at tiny birds and we headed back empty handed. I am unsure how much was real and stage and to what I felt about our visit. However the project gives each group some maze, oil and beans plus help to take the kids to school by taking.

Heading back for a lovely breakfast at our camp before we departed to have a quick look at the lake before heading towards the Ngorongoro Crater. The lake was huge yet very depleted in the wet. On the way to the crater we stopped in Karatu for a quick weld of the radiator by a group of guys at the side of the road. As the 5 of them set to work we walked round town to the amusement of many locals.

The radiator was fixed and we set off up to the crater, which is a world heritage site. We weren’t doing a safari in the crater but just staying on the rim. The camp site was incredible. It overlooked the crater, we had it all to ourselves and the ‘tents’ were like a 4* hotel, nothing like we normal stay in! The food was as good as everything else. It was a brilliant way to cap of an eventful day.

Reflecting on the hunt in the morning I am glad I went but I wouldn’t go again. The land was so bare, volcanic rock and dust everywhere. There was vegetation but it was colourless and nearly every tree/bush had thorns. It was a harsh place to live and must be even more difficult when your way of life is constantly compromised. 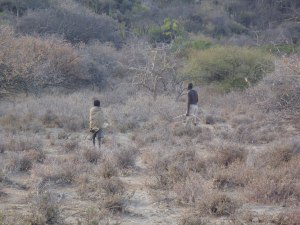